News
Net Neutrality? What is that anyway? And what can you do?

September 15 is the last date when the public can tell the FCC what they think about this issue. If you want to be heard, now is the time. So what the heck is this about anyway? Let me tell you a little story... 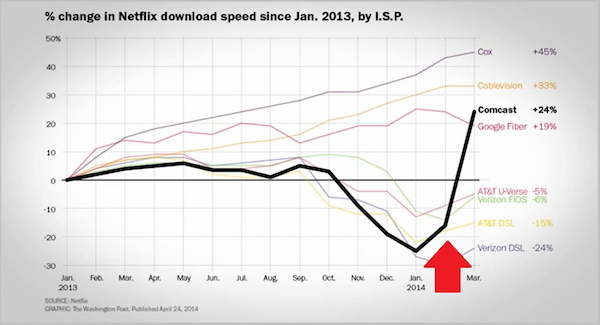 All of a sudden, my Netflix movies at home started "buffering" so I checked my bandwidth and discovered I had plenty... Hmmm... Then I called both Netflix and Comcast to complain. Netflix said, "Not us." But so did Comcast. I have the unfortunate advantage of being a tech nerd and it wasn't long before I figured out that Comcast was using something called QOS on their routers so my video streaming was a lower priority traffic than everything else. This went on for a month or so with me calling Comcast every time I wanted to watch a movie. One day (red arrow), I saw in the Wall Street Journal that Netflix agreed to pay Comcast so they wouldn't degrade video streaming traffic. That night my movie streamed perfectly and it has done so ever since.

For a comical but accurate explanation of what's at stake here, check out HBO's John Oliver on the subject. It's a 13 minutes long, but he nailed it beautifully. (He doesn't see all issues with such clarity.)

To make yourself heard, all you have to do is visit, FCC.gov/comments and find the proceeding with the title "Protecting and Promoting the Open Internet." Click the proceeding "14-28." You can also,try to click this direct link, but it might not work (government, you know). This is the FCC's Electronic Comment Filing System. Fill out the form and let them know what you think.

If you have any questions about this or any other technical issues, please give 111 Web Studio a call at 877-397-7605 or contact us for more information.

ONE ELEVEN MAINTENANCE NOTIFICATION Valued Customer, Phase 1 of this maintenance will begin...

To our valued customers, Around 2:00 AM on November 6, 2017 our operations team discovered a failed...

111 Web Studio is pleased to announce that we can now perform formal technology assessments for non-profit...

Dynamic Remarketing to Your Customers Online

Do you sell products or services on your website? Then this is for you. Have you ever been looking...

Do you need to show progress of a fund drive and create a buzz amongst your donors? 111 Web Studio has...